Recently, there have been a lot of innovative testimonial developments that can help your school grow, thrive, and stand out from the crowd. Are your competitors overlooking the power of website testimonials and not displaying them for all to see? Do you have lots of positive student reviews and want to find a fresh way to leverage them to attract new students?

There are quite a few exciting ways for you to gain the competitive edge in your market and get new students – all by using your website testimonials.

Attract new students by signing up for the Spectoos testimonial platform, today.

Check out these six website testimonials best practices that you can start implementing and benefiting from right away:

Individually, social media and testimonials are both uniquely powerful in any customer journey—whether we’re talking about an individual shopping for shoes or a student searching for an online school to enroll in.

Now, is the time for social media and student testimonials to merge into one powerful and influential mechanism.

Students tend to trust schools that display testimonials with pictures of the reviewers, as they seem more believable, and the potential student can better relate to a person they can “see”. By including links to the social media profiles of the reviewers in addition to the pictures, that trust is compounded. Being able to validate the reviewers’ identities on social media helps to prove that the testimonials are legitimate, can be believed, and can be used as part of the consideration process towards enrollment.

The Spectoos testimonial widget is already ahead of the game as far as linking social with testimonials goes, since the tool already offers the ability to connect every testimonial to the reviewer’s online social media profile from Facebook, Twitter, and LinkedIn, to name a few. 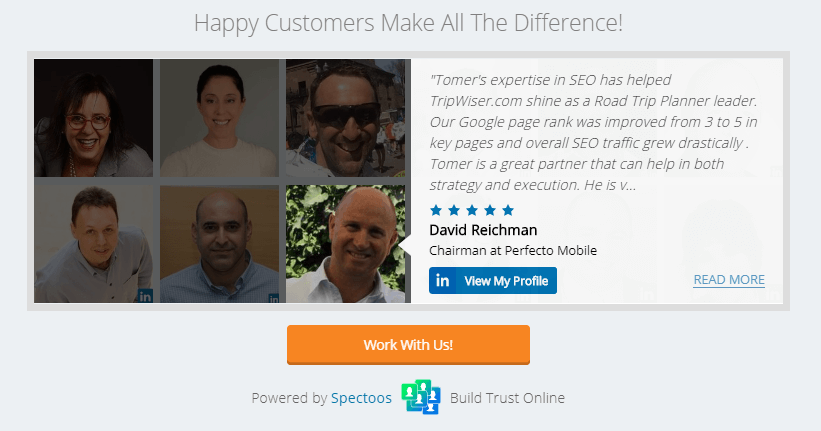 Every niche and industry has its key influencers who students respect, admire, and look to for guidance. These influencers share their expertise often on platforms that make their content free and easily accessible to the public, such as blogs, newsletters, and social media.

Students will not only check student testimonials before they make an enrollment decision. They will also look at influencer-generated content—including testimonials, mentions, or even student reviews—about your school before they decide whether yours is right for them.

Reach out to past students and leaders in education to ask them to review your institution and/or write a post about their experiences and opinions on social media. Check out this blog post on influencer marketing to get more advice on how to start doing it right.

Today’s online schools are deeply familiar with the different tactics, tools, and approaches to draw in leads and convert them into students. Content marketing, SEO, email marketing…you’ve been there and done that.

What online schools need to start doing more seriously is adding testimonial optimization to their arsenal. In order to effectively use testimonials to drive conversions, you will need to measure the performance of your website testimonials and display the ones that generate the most views, clicks, and ultimately, result in the most conversions.

With Spectoos, analyzing and optimizing testimonials is a breeze thanks to the platform’s intuitive dashboard, which visually displays how each testimonial is performing and makes it simple to determine which are the most effective ones to display.

With over a billion users spending hundreds of millions of hours consuming its content daily, YouTube is one of the most influential social media channels.

Video testimonials are a more effective way to attract new prospects. Videos have the unique ability to tug at viewers’ heartstrings, quickly putting them into the shoes of whomever they are watching and learning about.

Storytelling through videos gets potential students emotionally involved almost instantly. Videos quickly speak to the innate human tendency to connect with people, so they make for very powerful testimonials.

Nowadays, nearly everyone is active on at least one social media network. But people aren’t only using social media to interact with friends and peers—they’re also using Facebook, Twitter, LinkedIn and other social channels for engaging with the companies and brands they like.

According to GlobalWebIndex, a third of the time people spend online is on social media, so it makes sense for schools to display testimonials where their potential students hang out in order to get new leads.

For example, the Spectoos widget makes it easy to display testimonials under the Testimonials tab on a Facebook company page. With Spectoos, schools can even collect their testimonials from wherever they may be—such as Yelp and other platforms—and display them together in one place.

Use Testimonials for SEO

Testimonials can play a significant role in your SEO strategy, as they are keyword-rich content that is constantly updating. As such, they are a key tool for helping your school rank higher in search engine results.

Indeed, reviews from sites like Yelp already help schools rank in SERPs. But schools should start using their testimonials for improving their own website ranking.

These are the 6 main website testimonials best practices that you can use to attract students to your school. They will help you gain the competitive edge over other players in your market and enable you to leverage your good reputation to grow your student base.

Sign up for Spectoos to put your testimonials to work in ways you’ve never done before, and watch your school enrollment rates boom.

Tomer Harel is co-founder of Spectoos.com. He has been practicing Internet marketing for over a decade, helping hundreds of businesses to thrive online. If you'd like to contact Tomer or have him speak at a conference, meeting or event, please drop him a line via email (tomer at spectoos dot com).

Any cookies that may not be particularly necessary for the website to function and is used specifically to collect user personal data via analytics, ads, other embedded contents are termed as non-necessary cookies. It is mandatory to procure user consent prior to running these cookies on your website.