More than two-thirds (68%) of buyers said they frequently give credence to peer reviews and user-generated feedback, according to a DemandGen Report. So, it’s no wonder that many marketers use testimonials on their websites. The reason why is simple: testimonials are great for increasing conversions online and off. They do this in a few ways:

Testimonials appeal to the emotions of your customers, which according to the The New Science of Customer Emotions published in the Harvard Business Review, has been shown to help generate more business. And, 90% of buyers in a Dimensional Research survey admitted that positive online reviews influenced their buying decisions. How much so? According to Reevoo Stats, you can increase your conversion rates by 4.6% with 50 or more reviews per product.

Sign up for the Spectoos testimonial platform to start increasing your conversion rates now.

Then, there’s also the fact that testimonials, when used appropriately, build trust with your customers. In a best case scenario, testimonials with a profile picture and link to a social media profile lend authenticity, while reviews without them don’t garner the same amount of trust and credibility.

It’s clear that testimonials are key to garnering increased revenue from returning and new customers. The question is how much of a difference can adding testimonials make?

Let’s take a look at how much PrepAgent benefitted from adding their testimonials to their website using Spectoos.

As an online real estate exam preparation service in an aggressive market, PrepAgent couldn’t afford to be just another one in the crowd. They needed a way to differentiate themselves from their competitors and to demonstrate their best-in-class content and support.

To do this, they wanted to prove that their customers were happily satisfied with the product and service they received, especially compared to their competitors.

In Spectoos, PrepAgent found a technology partner with a testimonial platform that would allow them to display their stellar reviews on their website, instead of solely on Facebook, as one way of demonstrating their success. 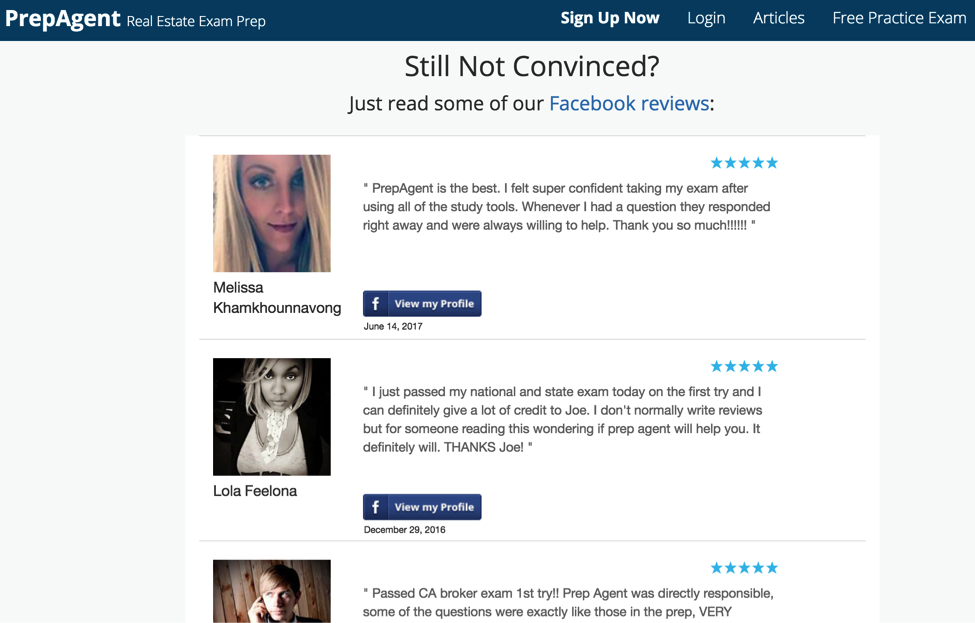 Within 13 days of implementing Spectoos, PrepAgent had noticeable results including a 40% boost to their average revenue.

After launching over a decade ago, PrepAgent had the goal of becoming the top provider of real estate education in the country. They wanted to do this by offering premier quality content and best-in-class support including exam preparation questions, videos, and other instructional material.

One challenge to this goal was the heavily competitive space. There were many similar real estate exam preparation companies garnering for their customer’s attention, making it difficult to stand out amongst the noise. The good news was that many of their competitors have lackluster, or even dismal, customer service and reviews.

Give your online reputation a boost by signing up for Spectoos’ testimonial platform, today.

The key for PrepAgent was to demonstrate their superiority through reviews. Unfortunately, most of their stellar reviews were found only on their social media sites, specifically Facebook. This presented a large problem.

Most of PrepAgent’s customers found their web page through organic search, not Facebook, and so they didn’t know about their many excellent reviews. And while having a link to the review page on Facebook was an option, it didn’t highlight the reviews or provide an opportunity to display LIVE, up-to-date reviews directly on the homepage as solid proof of PrepAgent’s product and service.

After comparing a variety of technology platforms and widgets, PrepAgent chose Spectoos to solve their testimonials problem.

The Spectoos testimonials platform stood out thanks to its straightforward design and easy implementation. The intuitive backend and powerful dashboard allowed PrepAgent to easily copy existing testimonials from their social media sites and to manage them as needed.

The Spectoos platform was also highly customizable. Within minutes of signing up, PrepAgent was able to modify the color, font, size, and complete look of their testimonials display, so that it matched their branding.

Once the testimonials went live, Spectoos and PrepAgent completed an A/B test using Google Analytics to determine the benefits of adding testimonials to their site. The test was completed using the “Pricing Page” as their gauge of success.

After 13 days and 5,806 website sessions, the addition of testimonials via the Spectoos  platform revealed impressive results. Compared to the original (pre-testimonial) landing page, PrepAgent recognized a 40% boost to their average revenue.

Simply by using an intuitive testimonial platform to display reviews on their homepage, PrepAgent was not only able to garner more website visitors, but was able to increase the average revenue of each visit by as much as 40%. The best part was that PrepAgent didn’t have to change any other part of their business strategy. They were able to use existing reviews from their Facebook page and repurpose them as a powerful marketing tool.

Thanks to the addition of testimonials on their homepage, PrepAgent was able to demonstrate the superiority of their content over their competitors and to build trust with potential customers by displaying online recommendations from strangers. And thanks to Spectoos integration with Facebook, PrepAgent could even double their impact with a new testimonial tab of their social media page.

If you’d like to discover how Spectoos can help to improve your small- to medium-sized business or freelancer profile, contact us today.

Tomer Harel is co-founder of Spectoos.com. He has been practicing Internet marketing for over a decade, helping hundreds of businesses to thrive online. If you'd like to contact Tomer or have him speak at a conference, meeting or event, please drop him a line via email (tomer at spectoos dot com).

Any cookies that may not be particularly necessary for the website to function and is used specifically to collect user personal data via analytics, ads, other embedded contents are termed as non-necessary cookies. It is mandatory to procure user consent prior to running these cookies on your website.